Find the biggest problem worth solving with these three product rules

I used these three product rules to find the biggest problem people have with documents. And I’ve solved it. Learn more about my new product FYI.

About two years ago, my co-founder Marie Prokopets and I got really interested in fundraising. We were talking about fundraising to companies all the time and giving them advice about how to raise money. I had more requests for fundraising conversations than ever before. A dam had burst.

We thought there must be a problem for us to solve in the fundraising market, so we dug in with research.

That single tweet led to us interviewing 37 people, all of whom had serious challenges with fundraising.

Kaboom. We had discovered a huge problem! We learned a few core things in our research that informed what we ended up building:

We did a couple dozen more interviews until we were convinced we were onto something.

As soon as we felt we’d done enough research, we started building dogo, a tool that lets founders get feedback on their pitch decks and share them with investors.

Here’s what the early version of dogo looked like: 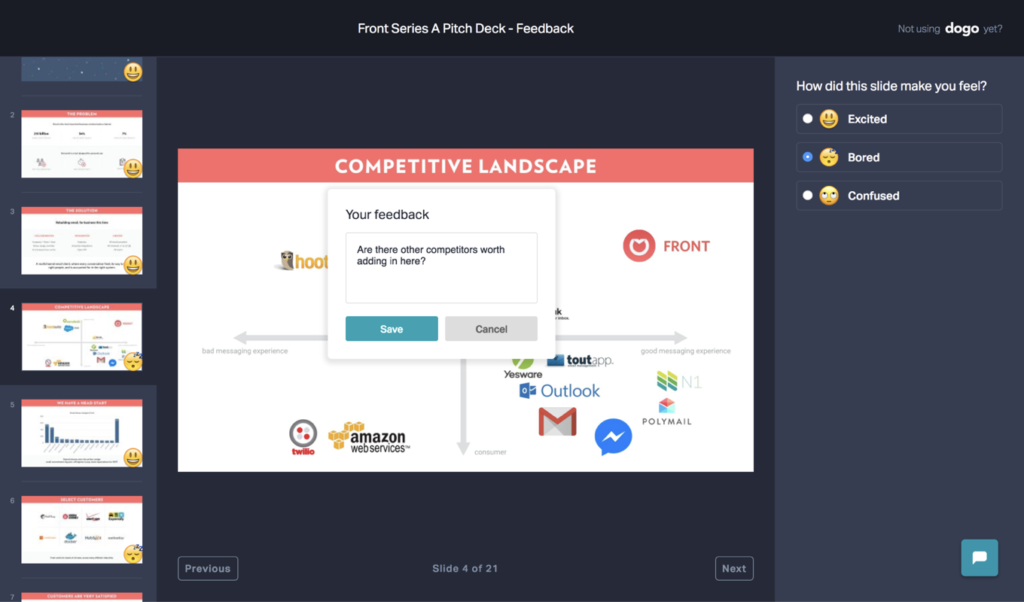 In just a few weeks, we had hundreds of customers using dogo to get feedback on their pitch decks and share their decks with investors. We also had dozens of people tell us stories of how critical dogo was while they were raising money.

But we never launched dogo. We killed it.

It’s not because people don’t find it useful.

It’s not because we couldn’t find users for it.

There are so many companies vying for VC money, that each closed deal means there were hundreds, even thousands of companies that wanted to be funded but weren’t.

The biggest problem founders have is pitching investors and raising money. But that problem just wasn’t enough. We misjudged the market.

We didn’t realize it at the time but we made a classic startup mistake.

The funny part: we stopped working on dogo without realizing our mistake. We started to notice subtle problems with the product. People weren’t willing to pay, companies went radio silent after raising their round or failing to, we had trouble getting the perfect set of features that got everyone excited.

We weren’t sure what the root cause was at the time but we decided to pivot anyway.

That’s when I came up with an idea that let us copy and paste our code. My team still makes fun of me for this.

We took what we learned from dogo and repackaged it into a new product called Draftsend. We had learned during dogo customer interviews that people wanted to add their voice to presentations, so we decided to make that a core feature of Draftsend.

With Draftsend, people could share PDFs and see what recipients did with them, plus they could add audio to those PDFs. There were many companies in the space like DocSend and Clearslide. We had an innovative approach that focused on audio.

At first, it seemed like our ingenuity and copy-and-paste strategy paid off.

We had over 2,000 people subscribe to our Product Hunt Upcoming early access page. People were tweeting about us like crazy! And when we launched on Product Hunt, we had over 1,700 upvotes, over 130 comments, plus loads of reviews of the product. We were the #1 Product of the Day on Product Hunt.

But the buzz quickly faded.

The idea was novel and fun, yes. But we had fallen into the same trap as we did on dogo.

With dogo and Draftsend, we assumed we were targeting giant markets. But we never took the time to actually think about it and ask ourselves questions that might change our approach.

We didn’t ask ourselves these questions because, quite frankly, we were blinded by the problems we had discovered. We didn’t take a step back to actually think about the market and the opportunity we were heading into.

With dogo, we had created a product that was episodic and in a small market category where people wouldn’t actually be able to pay for the service we offered. Companies don’t raise money every day or every month. They only raise money a handful of times, ever, if at all. On top of that, the customers didn’t actually have the money to pay us, and what we had created for them wasn’t really valuable enough for them to pay.

Our excitement had blinded us. And we were blinded again when we built Draftsend by reusing code from dogo.

Though the idea is innovative, the presentation sharing market is actually quite small. We thought that by adding audio we’d be sitting in the video market, but people had too many feature expectations for us to compete with video software. We were stuck between a rock and a hard place, in a small market. And we realized it would take us too much effort to make the business a success.

Making this mistake once was painful. But twice… even worse. These mistakes still hurt. Marie and I are both still embarrassed about chasing imaginary markets instead of focusing on market size early before going down the path of building a product. We wasted our time and resources chasing the wrong opportunities.

There’s a right way to think about your product and how it fits into a market. We did it the wrong way with dogo and Draftsend. Through these two failures, we’ve developed a few rules that have led us to building our third product, FYI.

Don’t get too excited about a problem unless it’s worth building a business around.

What’s a problem that’s worth building a business around?

The market should be large. Market size is the first thing that investors look for. Which used to make me angry to no end. I just didn’t get it every time I heard it. Market size always felt like the wrong way to think about your business in the early days. It seemed like a lot of thinking about an opportunity instead of just attacking it.

I used to think investors would talk about market size because they needed big outcomes. They needed the companies they invested in to go public or be sold in order to make their money back and more.

But I was wrong. Investors are right. Investors are looking to invest in companies that are likely to succeed, and one thing they use to determine that is the market size of the opportunity. They are looking for businesses that can serve millions (or even billions) of users and/or ones that can earn billions in revenue. They are chasing big market opportunities and looking for founders that are eager to do that.

If you want to chase a small opportunity, that’s ok. But you’re decreasing your chances of success right from the beginning. Targeting a market where you can only potentially make hundreds of thousands of dollars a year makes it that much less likely for you to hit your goals in the first place. The bigger the opportunity, the more likely that you’ll be able to make a meaningful amount of revenue in the market.

The second rule: Innovate with purpose

We were so innovative when we launched Draftsend. We spent so much time designing a product that would excite users because it was so novel. We even nailed the messaging to describe our innovative product: Presentations you can 👀 and 👂. We spent time getting the experience right and making sure the audio recordings worked flawlessly.

But in the end, that innovation was’t enough to overcome core problems with the product.

The presentation sharing market was so small it just wasn’t worth our time. And we had chosen an innovative angle that made the total addressable market even smaller. Not enough people who shared presentations wanted to add their voice.

Being innovative only matters when you’re solving the most painful problem for people.

Innovation for the sake of innovation isn’t going to win you a ton of customers. Solving the right problem in the right market is the key to winning enough customers.

Innovation only matters when there are enough customers who are adopting your product.

The excitement people had and ideas they mentioned about how they’d use the product were, sadly, false indicators. We mistook the positive feedback we were getting for us having Product/Market fit.

We were so blinded by our excitement about innovative ideas and markets we thought were large, that we allowed ourselves to be biased by positive feedback. We knew the right things to do, but we ended up chasing shiny objects instead of being methodical and objective.

When it came to charging customers for those two products, we quickly realized we were solving problems people weren’t actually willing to pay for. The problems just weren’t painful enough.

There were more important problems for us to solve in the document space. And we found those problems when we started doing additional customer development to make sure we were headed in the right direction on Draftsend.

Want to learn more about the biggest, most important problem we discovered in the document space? Sign up for early access to FYI.