How to Build Your Startup with No Technical Background or Budget

In 2008, three guys who couldn’t make rent in San Francisco were trying to fund their idea for an online apartment rental business. Inspired by the Obama-McCain election, they turned Cheerios and Captain Crunch boxes into “Obama O’s” and “Captain McCain” with cardboard and hot glue guns.

They ended up on national TV, sold out of their cereal, and used the money to keep working on their idea until they had a product ready to pitch. The earliest version of Airbnb was funded by Paul Graham of Y Combinator. What ultimately sold Graham was that the co-founders had sold Obama O’s to propel their business forward.

There are so many creative ways to start a business when you don’t have the resources right in front of you—and the Airbnb story is one of many examples.

In the beginning, building a startup is all about figuring out how to build momentum.

How to build your startup’s initial momentum

The co-founders of Airbnb used their Obama O’s to gain attention, raise a little money, and prove they had grit. They went from standing still to gaining the initial momentum to get off the ground.

A few months ago, I tweeted about how important momentum is to companies: 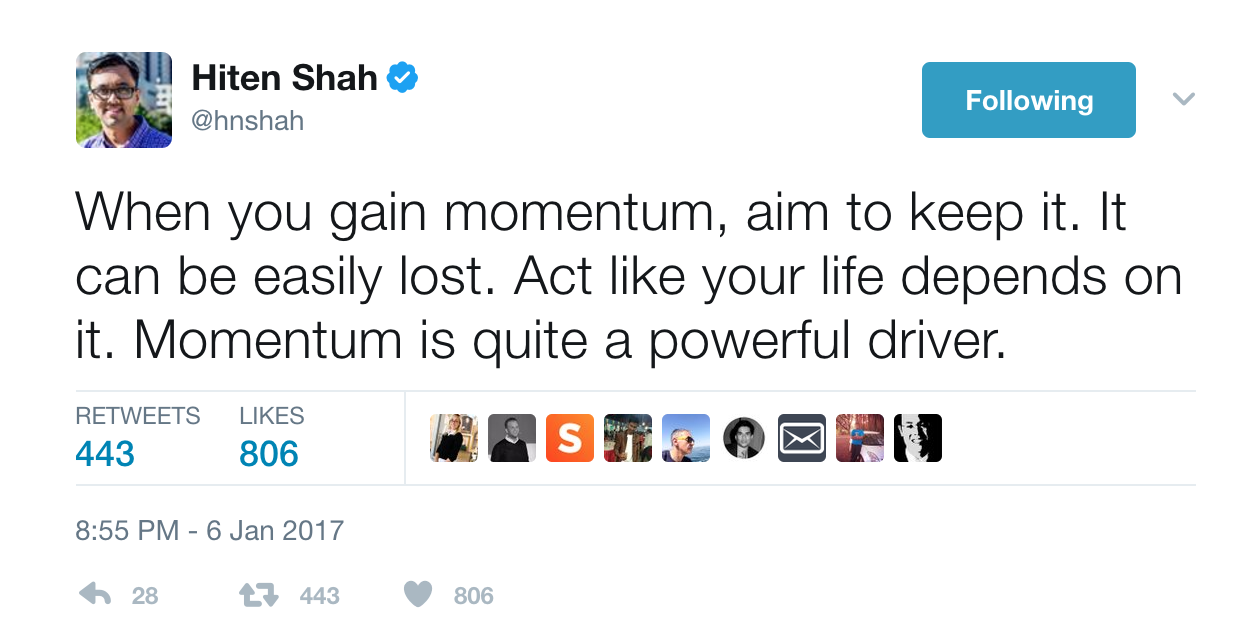 It can seem hard to get the initial momentum you need if you have a great idea but don’t have any money or technical skills to actually build a product. But the very first steps you need to take to get an idea off the ground don’t necessarily require money or coding.

You can’t think years or even months ahead. All you need to focus on at these earliest stages is getting to your very next milestone.

Here’s how you can use what you already have to take the first steps:

The advice above alone won’t get you to a finished product, but that’s not the point. The point is to do the things you need to build your initial momentum and take the first few steps.

Let’s walk through each of these ideas to help you get started right away.

If someone asked your about your idea for solving a problem, you could probably sketch it out with a pen and a napkin. It’s miles away from what your finished product will look like, but this first sketch is incredibly important.

You need the first stepping stone, no matter how tiny, to get to your next step. The only way you’ll be able to turn your idea into a real product is by communicating the concept well to other people and getting them excited about bringing it to life.

Beyond creating initial sketches or wireframes of your product, you can go a step further and actually launch your idea with a non-technical MVP. For example, Ryan Hoover built Product Hunt by researching tools and creating an email list. He chose a simple, low-tech way to scrap together his initial idea and get Product Hunt to the next step.

Hoover got the idea for Product Hunt because he always wanted to know what cool new products people were using. He saw that users on sites like Reddit and Hacker News wondering the same things. Hoover envisioned the finished product as a full website, but he built the first version of it in 20 minutes on his laptop in a cafe.

The very first iteration of Product Hunt was a collection of links, a mailing list, and a blog post explaining the project. To get the word out, Hoover tweeted about it:

People gave a lot of initial positive feedback about the idea and contacted Hoover to tell him they were excited to see it take shape. People knew that this was just a glimpse of what the real product might look like, but it was enough to generate interest and recruit support.

When Hoover wanted to build a more technical product, he reached out to people who had expressed interest in it. Nathan Bashaw volunteered to help Hoover build an early technical model, and others volunteered to test it out and give feedback. 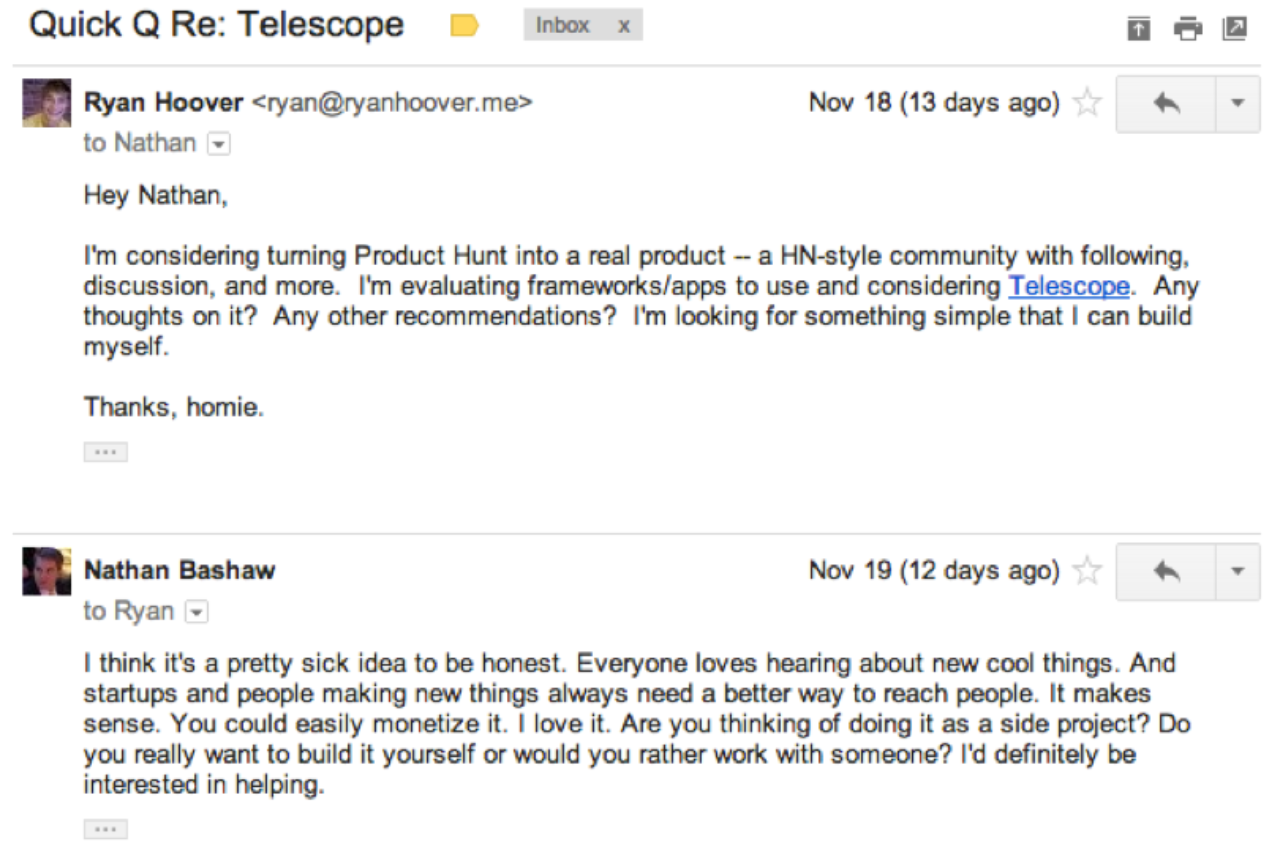 They had a working site up in less than a week. A year later, Product Hunt raised a $6.1M Series A led by Andreessen Horowitz. Nothing would have taken off if it hadn’t been for Ryan’s “experimental newsletter,” the first step that required minimal budget and technical skills.

When you’re sketching out your initial idea, your main focus should be about concept clarity and user experience. Hoover’s idea for Product Hunt was all about creating a community that people would want to participate in. A newsletter that was sent out to potential users was an excellent first version of this idea. It was a much more streamlined and direct way to communicate the product’s value than a full website would have been.

If you don’t have a technical background or money to pay a developer, you can still start working on an MVP. Here’s how you can get it off the ground:

There are a lot of ways that you can communicate exactly what you need to in an initial wireframe without coding or paying developers a ton of money. And when you’re just building momentum, an initial framework is all you need.

Companies in accelerators and announcements of big raises make it sound like you need to be feeding money into your fuel tank to get anywhere as a startup. This isn’t true.

When you’re scaling and looking to grow aggressively, having a big budget or raising money can help you do the things you want to do faster. But a small startup that’s working on validating an idea doesn’t have to worry about that. You don’t need that kind of money at this stage.

When you’re starting from zero, financing your first steps means working within your means to create something with potential. It often means your first steps will have to cost nothing or close-to-nothing. But that’s okay, because when you’re that small and new, you can do things that don’t scale. It forces you to prioritize the things that are really important—which are usually the things that will help you move forward faster.

This is how Wistia, the video-hosting platform for businesses, got off the ground. Co-founders Chris Savage and Brendan Schwartz began working on Wistia when they were living with a group of other new college grads in a house in Cambridge. They kept their cost of living low and only spent on what they really needed, like rent and food. Savage notes that “for entrepreneurs—especially those starting their first businesses—living expenses are your burn rate.”

The key is that they operated under the assumption that they could build a successful company with exactly what they had. They needed each other to bounce around ideas, their computers to create initial mock-ups, and a phone to call people and get them interested.

Limited resources helped them keep a narrow focus on reaching the next step: getting customers. An early version of their landing page wasn’t focused on design. It was focused on getting people to start using the product—even if the aesthetics weren’t perfect. 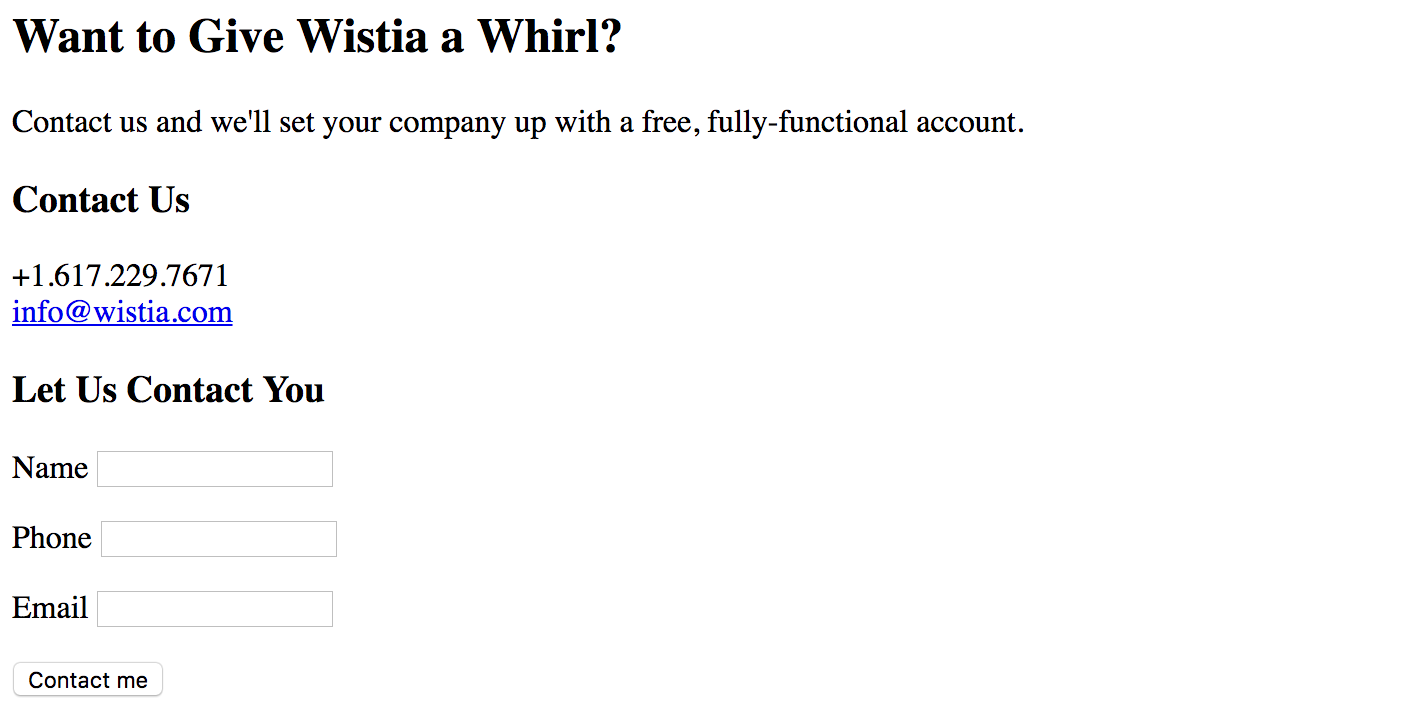 Savage and Schwartz knew the constraints they were working with. They didn’t have time or money to spend worry about how they would finance things later, so they always focused on the very next step.

Savage believes that Wistia’s early thriftiness and creativity helped the company develop the grit it needed to succeed. He says it made them good at doing more with less. When the company actually began to be profitable, they were able to grow faster and do more with the resources they had.

Having a gritty and resourceful mentality changes the way you prioritize things. It forces you focus on the things you absolutely need to do to get to the next step.

Here are some ways you might look to finance the first stages of your company with little to no budget:

When your company gets bigger, it’s difficult to maintain this kind of thriftiness. But when you’re small, you can and should find creative ways to make money and put it towards the work that’s absolutely necessary.

3. Be hungry to learn along the way

It’s important to surround yourself with a strong team, but that comes later. Before you can think about hiring a great engineer or working with a development shop, you’ll have to know how to look for answers on your own.

You don’t need a formal education in engineering to understand the basics of building a product. You can learn a lot on your own. And to create a really great SaaS product, you need the hunger to do whatever it takes to learn these fundamentals.

Alibaba founder Jack Ma built an e-commerce empire through self-teaching. He taught himself English while living in China and eventually got the opportunity to travel to the U.S. as a translator in 1995. That’s where he saw a computer connected to the internet for the first time. He gathered a group of 18 friends and taught himself how to set up a website where he could sell things to other businesses. That’s how the first version of Alibaba, Chinapages.com, was born.

Alibaba announced their IPO in 2014 for $25 billion, which at the time was the largest in the world. They handle more packages each year than eBay and Amazon combined. Ma has never had any formal training in software development.

Ma said, “There are three reasons why we survived. We had no money, we had no technology, and we had no plan.” The company used every single one of its limited resources very carefully, and the team was self-motivated to learn everything they needed to know in order to build a technology company from the ground up.

It’s much easier now than it was in 1995 to teach yourself how to code. If you’re interested and dedicated, there’s no reason why you can’t learn things like basic website building. This will help you put together a landing page for a basic first version of your product.

Let me be clear: You don’t need to learn how to build your entire product. After founding three SaaS companies, I still don’t know how to write code. But you do need to learn enough to know what questions to ask. Eventually, when you have a team of engineers, this will help you become a strong leader and steer your team in the right direction.

Here are some first steps you can take to amp up your baseline knowledge:

When you’re founding and growing a company, you’re going to run into problems that you don’t know how to solve—whether you know how to code or not. The hunger to learn and overcome your knowledge gaps—not your ability to write code—is what dictates whether you will move forward.

You’re always going to be troubleshooting

Being a founder means fixing problems that arise day after day. When you put out one fire, you immediately have to tend to another. You’re constantly learning out what you don’t know. This doesn’t change—even if you have years of coding experience and a big-name VC backing you. What actually makes a difference is having the momentum you built early on to overcome these challenges.

You need to build momentum with low-tech and low-budget strategies from the very beginning. Taking those scary first steps are the first challenges in a long line of challenges that you’ll face as you build a product and grow your company.

To build momentum early on when you feel like you’re standing still, ask yourself:

Meeting and overcoming initial challenges early on helps you quickly develop persistence and creativity. These are two qualities that you’ll need over and over again at every stage of your company.